Boarbatusks are an enemy in RWBY: Grimm Eclipse. On death, they give the player 25xp and 40 points. On assist, 15xp and 10 points.

The Boarbatusk is a quadruped with many features associated with a real-world boar, including cloven-feet, a line of hair sprouting from its spine, snub snout, and tusks.

The Boarbatusk seems to have four eyes, a series of plates along its back and on its thighs, and two extra sets of tusks, including two large curving tusks. However, their underside is comparatively under-protected and vulnerable, with little to no body armor or shielding.

The Boarbatusk can be found in these chapters:

This creature also has a chance of spawning in Horde Mode.

Both of these attacks have significant tells.

With the headbutt, it will lean its weight back, giving the player enough time to counter or dodge out of the way.

With the roll attack, it will hop backwards. This move cannot be interrupted, and only can be countered when it's actually rolling. Failing the counter, you can dodge away, which will still leave it in a stunned state most of the time. You can deal damage to the rolling Boarbatusk with ranged attacks if you're quick enough.

Much like the Ursa, Boarbatusks can be easily dispatched by waiting for a stun opportunity, performing a charged heavy, and then executing the team attack. This will take out a large chunk of its health, if not all depending on team attack, leaving it easily killable with your preferred combo.

Boarbatusks can also be launched into the air with aerial combos: this does not stop them from being able to execute their next attack if they didn't get stunned in the process, as they can start up their animation mid-air.

What's interesting, however, is that Boarbatusks have no guard state, but are heavily armored. If you're in a multiplayer lobby with very eager players that choose to wail on them instead of waiting, simply attacking can and will eventually dispatch them.

Player positioning is also helpful to keep track of, as Boarbatusks will chase you around the arena with ease. If you don't get stuck cornered, or against a wall, you should be fine.

A Boarbatusk getting annihilated by Blake's team attack 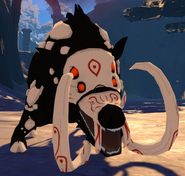 Nora performing her Counter on a Boarbatusk
Add a photo to this gallery
Retrieved from "https://grimmeclipse.fandom.com/wiki/Boarbatusk?oldid=6197"
Community content is available under CC-BY-SA unless otherwise noted.