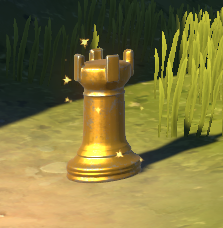 Artifacts are objects found throughout RWBY: Grimm Eclipse that can be collected for Professor Oobleck. They are worth 100 XP apiece and take the form of sparkling chess pieces. A soft chiming sound is heard when near an artifact.

Some of these artefacts aren't available on every run through, as some of them require going another route. Chapter 3 and Chapter 8 have alternative routes that is up to RNG, and Chapter 5 has the player choose whether to take the right or the left path at the start.

Chapter 1: Boots on the Ground

The first artefact of the game can be found in the very first arena, behind some rocks.

After finishing the second encounter, pass through the crumbled rock wall, and follow the path round that splits off to the right. At the end of this path, is the second artefact of this chapter.

After finishing the first encounter with Beowolves, go through the crumbled rock wall and follow the path around. Soon enough, you'll come to a wooden bridge with boxes and vases nearby. Destroy the boxes and vases, and go past them to find a partially hidden path. Follow this path down, and you'll find the artefact.

In the cave with the control center, go past the control center, keeping to the right. On the right hand side, is another smaller cave. Go into that, and on the left is a stone passage, with some foliage hanging off the entryway. In here, is the last artefact of the level.

As soon as you start the level, walk forward until you reach the edge of the cliff with barriers, making you choose whether to go left or right. Take the left path, and follow it around. Near a pillar, is the first artefact of the level.

After finishing the first encounter with Boarbatusks, go to the crumbled rock wall. As soon as you're in the entryway of where the rock wall was, turn about face. On the left, is a nook with boxes and the artefact in.

When you've completed the waved encounter with the bridge, cross it. Instead of taking one of the available paths, go immediately to the right, facing a box with some trees. Behind the trees, is the artefact.

As you make your way down to the control center, near the bottom, will be a box on a small hill. Go just past this box, and on the right, will be a small hill grass path leading around and back onto the main path. In here, will be the last artefact of the level.

After defeating the first encounter, go through the crumbled rock wall and drop down off the ledge. Go straight to the boxes at the other end of the courtyard, and to the right, is the first artefact of the level.

When walking down into the dried up waterway, go straight ahead and drop off the ledge. In the first pipe on the right is the second artefact.

After opening the door in the waterway, RNG decides whether you end up going right or left in this level. If you get the left path, follow the hill up and drop down. Once you've defeated the Beowolves, don't go through the crumbled rock wall. Instead, follow the arena around, so that you're facing the waterway again. Down this little road, is the artefact.

After opening the door in the waterway, RNG decides whether you end up going right or left in this level. If you get the right path, follow the path around, and drop down. Kill the Boarbatusks and Creeps. When you're done, go to where you dropped off and face down the street. On the left side is a little nook with the artefact in.

Chapter 4: Below the Surface

At the start, follow the path around until the first large cavern. Behind the fence on the left, is the first artefact.

When you reach the first set of train tracks, instead of following them up, take a hard left as if going down the tracks. At the end here, at the start of a collapsed tunnel, is an artefact.

When you first reveal the bomb, there is a fence to the left with a bunch of boxes behind it. This is where the artefact is.

This artefact is in the bomb segment. When the first door opens, keep right. On the right should be 3 boxes in a line. Behind and to the right of these 3 boxes, is a little nook. In here, is the artefact.

If you've chosen to take the right path, go up the hill and defeat the encounter. Go through the crumbled rock wall, and halfway down this path on the right will be a cleverly disguised jumping puzzle. Jump across all the pillars onto the ledge on the right, and in here, will be an artefact.

After defeating the encounter in the circular arena, go through the crumbled rock wall. Near immediately on the left is a stone archway. Go through the stone archway, and go to the back of this little arena. Between some rocks on the right, is the artefact.

Shortly after the previous artefact, go up the huge hill that the character will comment on. As soon as you drop down into this arena, go to the far back of the area. Behind a tree is the last artefact of the level.

Chapter 6: End of the Line

As soon as you start the level, turn about face. On the left, behind where you spawn, is a little nook with the first artefact of the level in.

After getting the scripted event with the boat, follow the path around and defeat the encounter with the Beowolves. Before going through the crumbled rock wall, go to the waterfront near the pillar. Behind this pillar is the next artefact.

When you enter the temple, go down the stairs but do not drop down. On the left the giant pillar, is the next artefact.

After getting the small custscene that pans over all the cargo containers, go through the three open ones but do not go into the final one at the end. Instead, go left and turn around to face where you came from. Here you'll see the final the final artefact of the level.

Chapter 7: The Island of Dr. Merlot

As soon as you spawn in, go forward but don't drop down. On your left is a little cranny. In here is the first artefact of the level.

When approaching the first tower of the level, instead of going up the hill, go underneath the tower. Behind the back leg is the artefact.

After going through the warehouse, follow the path around and drop down. Behind the rock near the waterfront is the artefact.

At the last tower of the level, go up the hill and around onto the metal walkway. From here, you have to platform to the top of the container to get the artefact. It's tricky, but doable.

At the start of the level, go past the first toxic puddle and go between the two pillars. Behind the second pillar is the first artefact of the level.

If, thanks to RNG, you get the left path after shutting off the steam at the pipe T-junction, follow the path round and defeat the encounter. After defeating the encounter, turn off the steam, and go out onto the metal walkway. On the lower path, down the stairs, is the artefact.

If, thanks to RNG, you get the right path after shutting off the steam at the pipe T-junction, follow the path round and defeat the encounter. When you've defeated all the enemies, turn around and face the back wall. On the left, between the pipe and some kind of silo, is the artefact.

This artefact is in the final arena of this map. After you've had the custscene of zooming in on Dr. Merlot's front door, ignore the Grimm that spawn. Near the back of the arena are two white containers. Directly in front of these containers is the last artefact of the level.

Before hopping on to the first elevator, go left of it. Behind the containers is a vent with the first artefact of the level in it.

After getting off the first elevator, you'll face an encounter. As soon as you defeat it, go behind the two containers in the middle of the room. This is where the artefact is.

Directly after the last artefact, go into the vent where you have to shut off the steam. Instead of going right to the valve, go left. In this part of the vent is the artefact.

In the area where you have to destroy all tanks, complete the objective and destroy the enemies that spawn afterwards. Before continuing on with the level, go to the far back of the arena, and follow the low path. Behind the massive hill, and near the lowest tank, is the last artefact of the level.

As soon as you spawn in, face left. In the corner is the first artefact of the level.

In the area where you have to destroy all the power nodes, do so and defeat the spawned enemies. Before going into the elevator, look behind the container to the left of the elevator. This is where the artefact is.

In the area where you have to destroy all the vats, do so and defeat the spawn enemies. Before crossing the bridge, go to the back of the room. To the right, and partially behind one of the vats, is an artefact.

Defeat the final boss, and pass through the newly opened door. Before crossing the bridge, immediately go right, and behind the container is the last artefact of the game.

Retrieved from "https://grimmeclipse.fandom.com/wiki/Artifacts?oldid=5529"
Community content is available under CC-BY-SA unless otherwise noted.